This week’s assignment from The League is . . . Movie Monsters!

Most people in my age group grew up on 80’s movie monsters like Freddy, Jason, Pinhead, Michael Myers, etc.  Not me.  The fact is that, I’ve only just seen ‘Nightmare on Elm Street’ and ‘Friday the 13th’ for the first time about a year ago.  I’ve never seen a ‘Hellraiser’ or ‘Halloween’ movie.

I grew up with these guys:

See, I’m the oldest.  I never had an older sibling showing me these 80’s slasher films.  On top of that, my Mom, is BIG into old movies so, I’ve been growing up on the Universal Monsters since day 1.  I would be talking about how awesome Bela Lugosi, Lon Chaney Jr. and Boris Karloff were and my friends would give me that “What the hell are you talking about?” face. 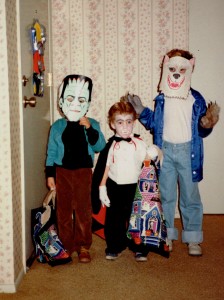 For reasons I’m unaware of, I’ve always been drawn to the Wolfman.  He’s always been my favorite monster.  I still watch all the Lon Chaney Jr. movies and will probably start showing them to my kids, provided they can sit still that long.

As for the Wolfman remake, I really liked it actually, despite the bad reviews.  I’m of the opinion that if you haven’t seen the 1941 original, you’re really in no place to judge the remake.  I sometimes feel like people are too jaded from watching the horror movies of the last 20 years but, that’s a topic for another day.

Anyways, I’m really anxious to hear about everyone else’s favorite movie monsters!  Have a safe Halloween everybody!

The League has spoken!

No Responses to
“When it comes to Movie Monsters, I’m old school”